Blog
You are here: Home1 / Blog 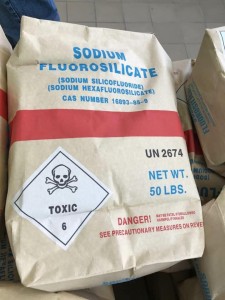 by Jocelyn Elizabeth
Member of a group I’m in took her kids to the local water sanitation plant. On the tour, she snapped this picture of the fluoride about to be added to the water. Do you see the skull and number 6? This means fluoride is a class 6 toxin which must be regulated and there are special rules on how to ship it because accidental exposure can lead to death. Some examples of class 6 toxins are: arsenic, chloroform, and snake venom. I don’t know about you, but I don’t want any of these in my drinking water. Even trace amounts.Makes you think about  in a whole new way doesn’t it? Say no at the dentist and fluoride free toothpaste!!!! Can hop on and find literature on fluoride as a neurotoxin….crosses the blood brain barrier. Lovely how this is put in our tap water huh?
http://www.thewaterplant.net/wp-content/uploads/2015/01/logo-300x138.png 0 0 Leslie http://www.thewaterplant.net/wp-content/uploads/2015/01/logo-300x138.png Leslie2018-02-07 23:28:592018-02-07 23:39:20Fluoride 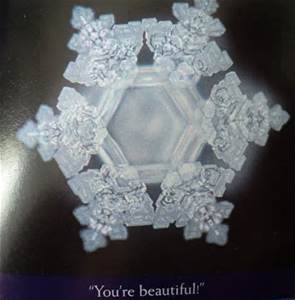 The Power of thoughts.
Through the 1990’s, Dr. Masaru Emoto performed a series of experiments observing the physical effect of words, prayers, music and environment on the crystalline structure of water. Emoto hired photographers to take pictures of water after being exposed to the different variables and subsequently frozen so that they would form crystalline structures.
Learn more here:
Water Crystals 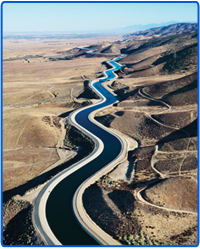 The Los Angeles County Waterworks Districts (LACWD), a division of the County of Los Angeles Department of Public Works, provides customers with water from three sources: local groundwater and water imported through the State Water Project (SWP) and the Colorado River Aqueduct (CRA).

The majority of the water in the SWP is collected as runoff and snowmelt from Northern California and the Sierra Nevada Mountains. While the source water is very pure, it collects sediments and organics along the way and must be treated before it is delivered for human consumption. The imported water is generally treated using conventional treatment methods including coagulation, flocculation, sedimentation, filtration, and disinfection.

The Colorado River Aqueduct stretches 240 miles from Lake Havasu on the California-Arizona border to Lake Mathews in Riverside County. California has been taking over 5 million acre feet of water from the Colorado River a year even though they are only entitled to 4.4 million acre feet. The Metropolitan Water District is a consortium of 26 cities and water districts that imports water from the SWP and CRA to supply drinking water to much of Southern California. In areas where local groundwater is available, LACWD owns and operates groundwater production wells which are used to pump the water from the groundwater basin to the surface. The groundwater is then disinfected and pumped into the distribution system. 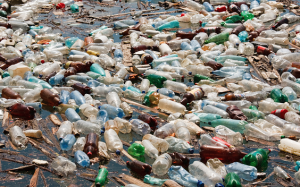 How you can help prevent garbage from floating in the ocean

Here at The Water Plant we truly believe we together can prevent more “Plastic Islands” in the pacific ocean. There are so many things you can do to prevent further environmental destruction from plastics that end up in our ocean ecosystems. These important steps are all of our responsibility: 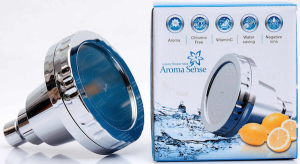 Indulge in our selection of fragrances that will leave you refreshed and energized. Select from our choices that include citrus lemon, and citrus mango.

The microfiber filter will prevent pipe residue and unwanted contaminants from permeating, allowing only particle-free water to propel through.

Our innovative shower produces up to four times the amount of negative ions compared to a standard one. Negative ions are concentrated in nature such as waterfall and have been scientifically proven to increase blood flow, relieve stress, balance pH, and facilitate breathing. 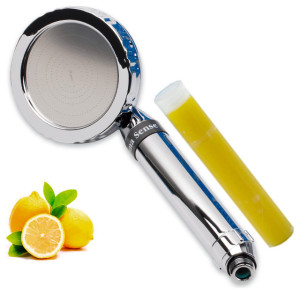 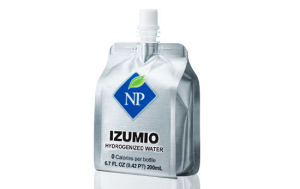 IZUMIO is a delicious tasting high quality natural water infused with hydrogen. IZUMIO contains water from the serene countryside of Japan, which is the source of hydrogen that provides antioxidant benefits. Thoroughly researched by the head scientist Shigeo Ohta Ph.D, a co-author of one of the first studies published on the antioxidative benefits of hydrogen, IZUMIO has become a household name in hydrogenized water in the Japanese market.

What is Antioxidation?
As ironic as it sounds, oxygen is an essential element that is needed for sustaining all life, but just like anything else, too much of it can be a bad thing. Oxygen is one of the most damaging and deteriorating elements that cause free radicals to develop in the human body. Free radicals are the damaged tissues, cells, or molecules resulting from oxidation. Rust is the deteriorating result of a chemical reaction in which iron bonds with oxygen through oxidation. Our bodies, with age, deteriorate and corrode just like any metal that is exposed too long to the elements. The deterioration is due in part to the oxidation of substances or tissues in our bodies. Antioxidants help by taking the extra oxygen from our bodies, combining them with another element to be safely absorbed or taken out of our bodies entirely, and preventing more free radical “problematic” cells from developing.

Water (H2O) is a compound of two elements: hydrogen and oxygen. It has the formula H2O, meaning that each molecule of water contains two atoms of hydrogen and one atom of oxygen.

By Ethan A. Huff | Natural News

The illusory notion that the federal regulatory agency known as the Centers for Disease Control and Prevention (CDC) is somehow a public entity working on behalf of the people to protect us all from disease is simply laughable.

The CDC, by definition, is a private corporation working on behalf of its stakeholders, which include key players in the pharmaceutical and vaccine industries that profit from the spread of disease, not from real prevention and cures.

The first and most obvious clue that the CDC isn’t what it appears on the surface is the fact that this supposed government agency is listed in the official Dun & Bradstreet (D&B) directory as a for-profit corporation.

D&B is a Fortune 500 company based in New Jersey that maintains databases on more than 235 million companies worldwide – it’s a who’s who of the global business climate, and is recognized as one of the first companies to be publicly traded on the New York Stock Exchange (NYSE).

Here’s a screenshot of the CDC’s listing on D&B, courtesy of the AntiCorruption Society: Big Pharma and the CDC: one in the same

An investigation by the British Medical Journal (BMJ) and the Bureau of Investigative Journalism (BIJ) found that three key “scientists” who helped develop official swine flu policy for the World Health Organization (WHO), recommending that practically everyone be vaccinated, received cash payments from both Roche and GlaxoSmithKline (GSK), two pharmaceutical giants that manufacture swine flu vaccines.

These two companies, as reported by The Guardian in 2010, paid off policymakers in multiple countries, including in the U.S. (at the CDC), to write the WHO’s guidelines for swine flu that pushed dangerous swine flu vaccines on millions of people globally. With the help of the CDC and other corrupt agencies, these pharmaceutical corporations pocketed billions of dollars.

“The tentacles of drug company influence are in all levels in the decision-making process,” stated Paul Flynn, a British Member of Parliament who spoke out against this racket as it was occurring.

The CDC has also been complicit in forging fake science to push other dangerous vaccines like the MMR jab for measles, mumps and rubella. Robert F. Kennedy Jr. blew the lid on this scandal that same year, outing now-shamed scientist Poul Thorsen for stealing $2 million in research money while covering up the link between MMR and autism, which the CDC ate right up in its quest to protect the reputation of MMR.

Top CDC scientist Dr. William Thompson has also since come forward as a whistleblower to expose the CDC for manipulating research findings that showed MMR causes autism at a disproportionately higher rate in young black boys compared to other children – though MMR causes autism in all types of children, this same research found.

“As more and more ‘vaccination’ propaganda appears in the mainstream media, it is crucial that the American people become aware of the outrageous scam the CDC and the medical industrial complex are running,” warns the AntiCorruption Society.

“All that is needed is for folks to educate themselves and join the many good people (professionals and non-professionals) working to get the truth out.” 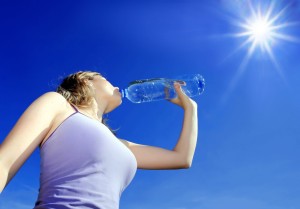 Tap water: is municipal water that comes out of the faucets and has been treated, processed and disinfected. It is purified with chlorine and generally has added fluoride. But one of the byproducts from using chlorine in our drinking water is linked to cancer.

Reverse Osmosis Water: goes through membranes that remove larger particles, pollutants and minerals and is usually at a neutral pH level of 7.0.
Alkaline Water: has sodium bicarbonate added so the pH level is at 8.0 with usually the reverse osmosis water but has no other minerals in it. Alkaline water claims to help many help problems like digestion. Soft and sweet.
Oxygenated Water: is the Reverse Osmosis Water with pure oxygen added once in the pulmonary system can ease breathing after a workout, increase energy and clear foggy thoughts. Also has a clear, crispt taste like an elixir.
Structured Spring Mineral Water: is the Reverse Osmosis Water pumped through a canister shaped inside as if it was a natural mountain side setting. Water forced through the canister to imitate water flowing over rocks, waterfalls and underground collecting minerals and bringing the original water memory back to the water. It’s pH level is at 7.2 and has a very nice clean taste to it.
Kangen Water: Kangen water originates from Japan, where users have been touting its health benefits for years. The process of creating Kangen water attempts to replicate the supposed health benefits of various sources of “healing waters” around the world. The name Kangen is reputed to translate to “return to source,” meaning that the process creates water that has been purified and is more like the water found in unspoiled nature. Kangen water is created by passing the water through the Kangen filtration machine which ionizes the water to eliminate free radicals, changes the pH of the water to an alkaline or basic pH (8.5-9.5), and adds what is called “active hydrogen” to the water. Health benefits claimed by the makers of Kangen water machines include reduced aches, pains, and general fatigue, slower aging and cleansing of all the body’s systems. 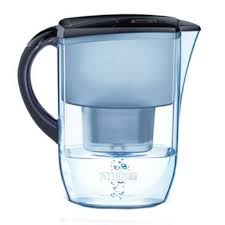 Brita filters, which is owned by the chemical giant Clorox are very popular because of the notion that you can simply have better tasting and better for you tap water with just a $39 investment and replacement filters every now and then. It’s really not true at all. It claims to remove chlorine and metal sediment but it only hides the taste and yes maybe some sediment but not all. They do have a sparkle when sitting on your neighbors counter, clean white plastic with a clear container is appealing but the water it “filters” doesn’t taste very good. Assuming you are using just regular old FREE tap water with a Brita filter is no way going to REMOVE traces of multiple toxins that are found in our city municipal tap water. It is better to fill your own bottles with Purified water from your local drinking water store, especially The Water Plant.